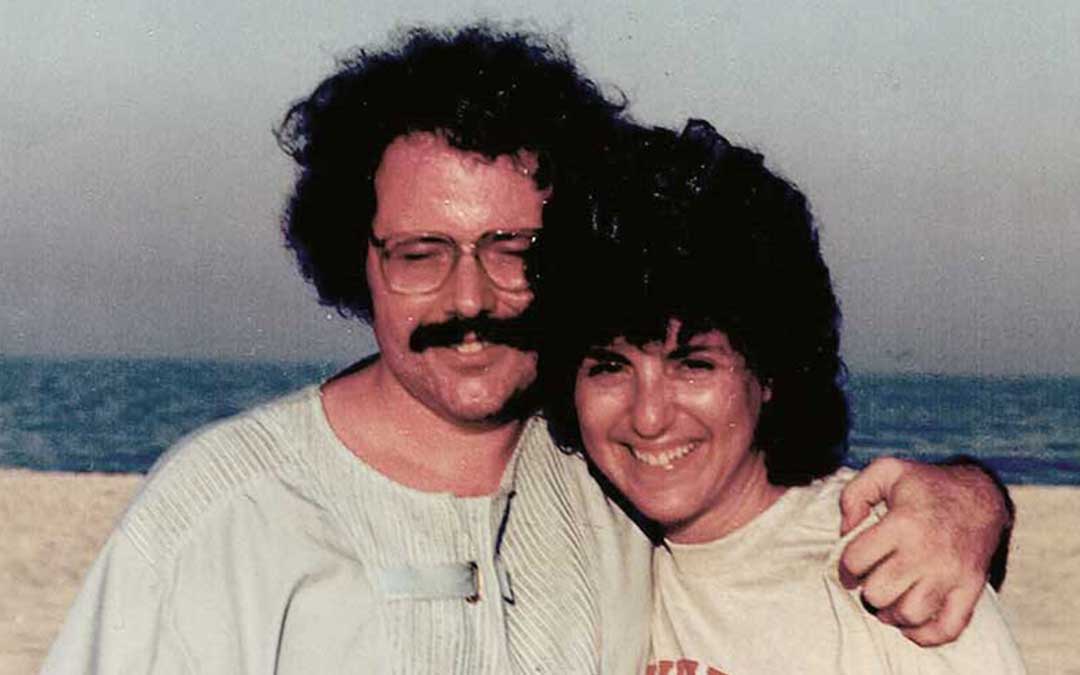 We met in a group summer house in Bradley Beach in the early 1980s, even though we lived two blocks away from each other in New York’s East Village. We were just casual friends at first. The first sparks lit on New Year’s Eve, 1985, when the summer house group went out partying in New York, but we didn’t follow up. On Labor Day weekend, 1986, we went to the Osprey and a few other bars in Manasquan with the rest of the group, and then we two ended up sharing a kiss on the Spring Lake boardwalk. Here we are, in Bradley Beach thirty years later!

The group house lasted into the early 2000s, with the big difference that at the end of summer 1993 we became the landlord when we bought the house we had rented on Evergreen Ave (we had moved in together in New York in 1992). Since then we have split our time between Bradley and New York—we spend almost every weekend, holidays, and summers here. Our house has a big deck, a backyard, and a porch, perfect for meeting neighbors and throwing parties. Being at the beach has so enhanced our lives and our relationship, so much better than our small crowded apartment with its erratic heat.

We both love living here, love the beach, walking and biking on the boardwalk. In good weather we walk on the boardwalk almost every evening, a tradition we started when Ilene couldn’t be in the sun one summer because of chemo. So we started going to the beach at night and looking at the stars. But we also love being here in the fall and winter—football, friends, music, restaurants.

We are both big fans of the music scene at the shore. Bruce, Southside, many local musicians like Chuck Lambert and Billy Hector. Our first summer vacation together, in 1987, we went to the Stone Pony one night to see Cats and to everyone’s great joy, for $4 we got to see a surprise show of Bruce and the E Street Band that lasted for hours. We’ve seen them many times since, in Asbury and in concerts. In 1999, we celebrated becoming registered domestic partners in New York City by exchanging rings in the parking lot of the Continental Arena before a Springsteen show (we never did get married).

For many years we hung out at Jason’s Jazz and Blues club in South Belmar, as it used to be called, and still have many close friends from that time. More recently we’ve spent many evenings listening to music at UVA and Giamano’s (we will miss you). We also patronize many of the terrific restaurants that have opened in Bradley since we have been living here.

We survived Sandy with no problem, but the year before the storm our house burned down. Our wonderful neighbor friends tried to put the fire out and then they suffered through a year of reconstruction. We appreciate them so much. Sandy hit one day after we had passed all the inspections to move back home, and we had to evacuate our rental near the beach because it flooded. So we moved back into our house with almost no furniture, some boxes, no electricity, and no hot water. At least we were home. That’s been our life together; as someone said, “when life hands you lemons, make wine.”

So much has happened in 30 years, good and bad. We’ve survived the bad because we have such a strong commitment to caring for each other and the ability to pull ourselves together, go out and have fun, and throw another party for the wonderful friends we have made at the shore. Labor Day 2016 we had a big barbecue in our backyard to celebrate 30 years together, and we look forward to celebrating many more.