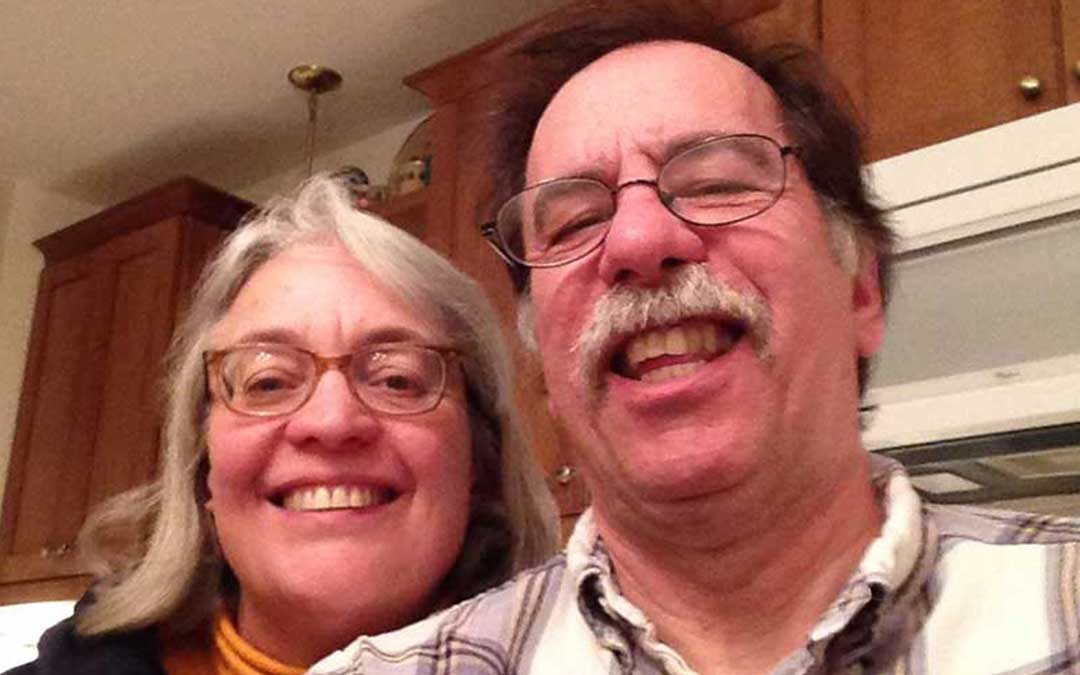 We met at Bradley Beach in the summer of ’83. We were both part of a large group of people who rented a house each year, and then scheduled weekends based on how many “shares” one bought: a full share was every weekend, a half share gave one half the weekends, etc. The summer went from Memorial Day to Labor Day. This particular group had a lot people involved in Unions, with conversations ranging from politics to sports to food.

We first met on a very hot Fourth of July weekend (temps hitting 100 degrees). I was a serious runner in those days and had just finished a long 6+ mile run on the boardwalk, and headed down to the beach. Karen was in conversation, taking some kidding for her “Boycott Campbell Soup” tee-shirt. Both of us were coming off what could be called “relationship issues” (though we didn’t know about each other’s situation at the time.) Karen had recently separated from her husband; I had not been in a romantic relationship for over three years, (and had not even dated for two years.) We were close in age, just over or under 27. We noticed each other and struck up some conversation. The beginning had begun.

The evening included a great barbecue that this house was known for. Later a group of us went to Seaside Heights. There was plenty of drinking and laughing, and general carousing. Karen and I went on the Ferris Wheel where we had our first kiss. On the way back we stopped at Point Pleasant, and took a blanket and lay on the beach together. The rest, as they say—though we didn’t quite realize it at the time—was history.

We spent quite a few weekends together at Bradley that summer, as well as weekends together in New York City, where both of us lived. But our early relationship was a true “Beach house” affair. That summer’s sound track was filled with Bruce Springsteen, Cyndi Lauper, and Michael Jackson. We developed the ritual of going to Barry’s (a bar that’s no longer there) for their great chili and beer. We would go to favorite Italian restaurants, especially Vic’s in Bradley, and Mom’s in nearby Neptune. We loved getting steamers on the boardwalk. Sunday mornings we would often walk along the boardwalk to Asbury, where we would go to Perkins for breakfast. One of our friends in the beach house—who is still a good friend—Ralph Paladino, seemed to know every bar and restaurant from Long Branch to Point Pleasant, and so we would go to bars, clubs, and restaurants up and down the Jersey Shore. But the center of gravity for us was always Bradley Beach.

We continued to be part of this house for years. While the actual house would change every few years, it was always in Bradley Beach. (Eventually Ralph and his partner Ilene would buy a summer house in Bradley, where we still get together.) In the meantime, we moved in together in 1985; we married in 1987. This October will be our 30th anniversary. When we had kids we took them for summer vacations to the Jersey Shore, staying in Bradley Beach or next door in Ocean Grove. Like us, they grew to love the ocean.

Looking back on that fateful July 4th weekend in 1983, we remember that I was in fact not scheduled to be there that weekend, but was feeling a little blue, had called the person coordinating the house, and found out there was space and so came down impulsively to beat the heat of the City. It turned out to be the stroke of luck of a lifetime, leading to a Bradley Beach romance that’s still going strong today.